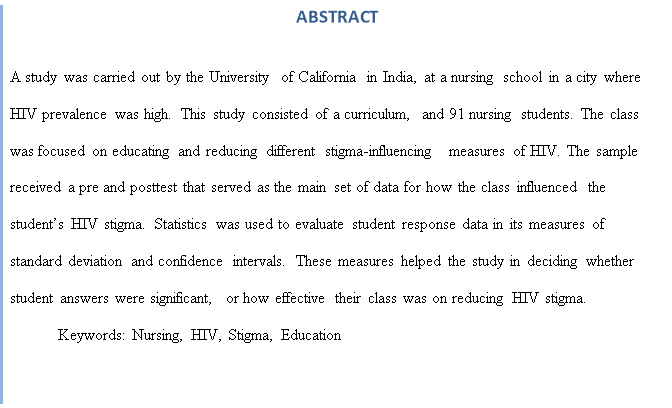 The journal article being critiqued is a study of HIV stigma and a study’s intervention at reducing that stigma among nursing students. First, stigma is introduced, the type of stigma’s seen with HIV, and then how those are interpreted in nursing practice. The purpose of the study was to reduce HIV stigma in nursing students through a dynamic course given at a nursing school. The article will be reviewed, analyzed, and critiqued in its significance as a research source and implementation value.

A study was carried out by the University of California in India, at a nursing school in a city where HIV prevalence was high. This study consisted of a curriculum, and 91 nursing students. The class was focused on educating and reducing different stigma-influencing measures of HIV. The sample received a pre and posttest that served as the main set of data for how the class influenced the student’s HIV stigma. Statistics was used to evaluate student response data in its measures of standard deviation and confidence intervals. These measures helped the study in deciding whether student answers were significant, or how effective their class was on reducing HIV stigma.

An HIV stigma is something that can alters one’s view of a person with HIV that is based on some cultural or social belief. The study believes that stigma can devalue or interfere with care for a person with HIV. This commonly effects people who are drug users, sex workers, or of the male homosexual population. It not only affects a nurse’s care, but also the patient’s motivation to seek care. The study states, “HIV stigma is considered to be among the greatest impediments to effectively combating the global HIV epi- demic.” There is instrumental and symbolic stigma, which includes misconceptions about transmission and attitudes or beliefs towards the previously stated populations commonly believed to have HIV.

The method of this study was at a nursing school in India, St John’s College of Nursing. Second year, English speaking students were the sample group. They were given information about what the study was going to test and signed informed consent to participate. The control group was 46 people, and the intervention group was 45 people. The course was focused on the two types of stigmas previously mentioned and offered on session on instrumental stigma, which included knowledge, fears, epidemiology, transmission, prevention and proper use of PPE. The second session was on symbolic stigma and had a speaker come and talk about their experience with HIV and HIV stigmas. The control received no intervention. A questionnaire was given before and after the interventions that assessed student’s symbolic and instrumental stigmas. They were asked questions like their gender and age, prior care for a person with HIV, their attitudes, misconceptions, fears, discrimination, and so forth. The topics of the questionnaires tested demographics, experience with persons with HIV, knowledge of HIV, endorsement of coercive measures, worry about HIV infections, blame, and intent to discriminate. This is included true or false, with different right and wrong misconceptions or truths about HIV. They were tested on whether they agreed with certain statements like mandatory testing, right to refuse an HIV patient, to marry, have children, etc. One question asked if the student blamed people with HIV for their disease or thought they deserved it. There were multiple-choice questions about medication administration and blood draws and precautions to take that tested the student’s intent to discriminate. Each section had a few questions that was intended to test the students aptitude in that subject area. All participants were female and between 18 and 29 years old.

Results were found to be significant. Post-intervention found many changes from the baseline that showed a reduction in stigma based on previous definitions. There was a lower percentage of misconceptions in the intervention group compared to the control group. Participants who had preexisting discrimination among people with HIV lowered with a question regarding medication administration, but did not lower with regard to drawing blood. There were a slightly lower number of people who worried about transmission of HIV but were not statistically significant when compared to the control group. On average about 95% of students believed the session was helpful and would change their care towards a person with HIV. About 40% of students were embarrassed to reveal their opinions about it.

The questionnaire taken before the intervention showed that the students had a fairly high HIV stigma. Compared the post questionnaire, control group, and preceding results, a conclusion that the course “showed promise” in lowering stigma of people with HIV was perceived. The questionnaire showed that students had high levels of “intent to discriminate while performing nursing duties.” In the study it says this may be because of lack of experience. Also students said that people with HIV were blamed for their disease if it was through drugs or sex and believed mandatory testing of sex workers and male homosexuals was called for. One of the biggest findings of this questionnaire was that there was seen to be a lack of knowledge among nursing students in transmission of HIV, blame of persons with HIV, discrimination in a professional workplace, and calling of coercive measures. This shows high stigma levels, which were akin to high discrimination levels of people with HIV. After the course however, it was shown to be effective in giving students more knowledge base for HIV stigma across many dynamics. The post questionnaire showed fewer misconceptions, less blame, and decreased discrimination. Not all data deemed to be statistically significant, but the data that was significant still deemed the course in reducing HIV held promise.

It might be more effective with a larger sample that also included male nurses, varying ages, and varying schools. It is significant that this study used a “convenience sample” of people that were readily available and in a high prevalence HIV area. Taking the study to various states, cities, and people of different cultural and moral values would make this study more significant in it’s actual effectiveness in reducing HIV stigma. Future continuation of this study should look at various population content and high numbers of people, mainly. All measures used to define stigmas, assess stigma levels, and test prejudice was based on a previously developed theoretical model of HIV that had been formulated in India. The definitions and guidelines of the curriculum seemed to be well defined and showed a good possibility of being standardized for larger sample size testing. They were also easy to understand and interpret. The questionnaire was a successful evaluation tool for this study (with 29 questions) and was well defined in the article. It might also benefit this study to try different methods of evaluation other than only using a questionnaire survey technique. It may even be interesting to compare the nursing students results with already registered nurses, experienced nurses, doctors, UAP’s, and patients/civilians.

This study is very important to nursing care today. HIV stigma is prevalent and something that is seen daily. Marginalized groups such as homosexual populations, female sex workers, and drug users should not be stigmatized from the moment they enter a hospital or become a patient, that is something they do experience as not only a marginalized group, but also the select few with HIV. Nurses are the basis of these patients’ care and need to be able to give care without bias or discrimination. This requires evaluating ones own beliefs of this stigma. A course that helps nurses through this process while also giving them a dynamic educational and experiential background of stigma’s, transmission, and persons with HIV would be extremely helpful to that patients care. Anything that can help nurses become better, give more effective care, and be more sensitive to others cultures, beliefs and illness is helpful to the medical field, and more importantly, helpful to the patients healing and disease process.

Personally, I believe that people with HIV are stigmatized well beyond due cause. Yes they have an incurable disease, and it can be transmitted through blood, which we deal with a lot as a nurse. But we still need to be professional and give proper care. A person with HIV is something that has been very popular to stigmatize, especially in our social and cultural society in the United States. Even I realized I hold some of these beliefs as I read this study. It is important as a professional, and as a nurse, to make sure we hold everyone to the same standard of care and give continuity in our nursing process. If this course was available to me it is definitely something I would be interested in taking. It can only help me to become a more effective and sensitive nurse to a patient with HIV and it is something that could easily be added into hospital orientation. It would be great to make it available to all staff and be more knowledgeable and less discriminatory against those with HIV and the marginalized population we target when we have an HIV stigma. This study is really just the tip of the iceberg on the subject of reducing HIV stigma, but I feel it’s the step in the right direction and could be vital in finding a way to resolve prejudices against HIV.

Check out how other students say about our services Reviews

Did not find what you wanted? Get help from our experts.

Find a Perfect and Reliable Professional Essay Writer Helper to write your essay for a Reasonable Price.

Need help with your Assignment?

Give us your paper requirements,and we’ll deliver the highest-quality essay at only $13 a page.

Some of the free features you will receive:

Find a perfect and reliable professional for your essay writing needs.

Get the best solution just for you
i

If you are a student who is struggling to meet tight deadlines, we are here to help! Do you need to employ an essay writing service? Hire us if you want the best essays. We are a dedicated staff of professional, well-seasoned, and superb essay writer helpers.

Did you know we provide the best dissertation writing service on the internet? We continue to receive favorable feedback from our consumers about the excellent work we produce. So, instead of worrying about whom to pay for the dissertation, contact us. We are a dedicated staff of professional, well-seasoned, and superb essay writer helpers.

We attempt to provide the essay help you require ensuring, that your papers are of the highest quality. When you decide to work with us, we assess your requirements and find the best writer to assist you with your essay. We are a dedicated staff of professional, well-seasoned, and superb essay writer helpers.

Here’s how it works: you place an order for a nursing essay, and we deliver. It’s as easy as it sounds. This is workable because we have the greatest professional paper writers that are both quick and skilled. We will assign your assignment to the most qualified writer

Our staff of qualified and professional paper writers has continuously distinguished us as the best coursework writing help service. They are all-natural English speakers with advanced degrees in a variety of professions. We offer the best essay writing services.

Our knowledgeable and expert article writing paper writers have advanced degrees in a variety of subjects. We will assign the most appropriate one to you based on the field and topic of your article review. They are all fluent English speakers who fully grasp your requirements. We are a dedicated staff of professional, well-seasoned, and superb essay writer helpers

Epidemiology in relation to health promotion – My Assignment Help

Debate: Should there be a GP Fee Policy – My Assignment Help

We use cookies in order to give you the best possible experience on our website. By continuing to use this site, you agree to our use of cookies.
Accept